Trae Young, 6’2 180 pounds born in Texas. Luka Doncic, 6’9 218 pounds born in Slovenia. Outside of basketball these two men should have absolutely nothing in common, but thanks to silly NBA GM’s we get to compare these two for the rest of their careers. Swapping draft picks in the same round is always an incredibly risky thing. Both picks could become hall of fame talents but losing out on the better guy will always be a black-mark on a GM’s resume.

Just this past year we saw Danny Ainge finagle the Sixers into taking the first pick for Philadelphia’s third overall pick and a future first. Now on paper that seems like a wash, but it turned out to be maybe the most lopsided trade since the Hornets got Vlade Divac for some guy named Kobe Bryant. The Sixers took the general consensus best player in the draft Markelle Fultz out of Washington. Since entering the league last year, Fultz has had horrid shoulder issues and because of that has had to completely change his jump shot. All of that resulted in an injury riddled and frustrating rookie campaign and while his future is still bright, calling his first season anything other than a failure would be incorrect. The Celtics went with Duke forward Jayson Tatum, who was an offensive juggernaut for the C’s in the playoffs, most notably dunking LeBron James through the Earths mantle in game 7 of the Conference Finals. Most analysts assumed because of the lopsided trade most teams would stay away from swapping high prospects in the future. Hawks GM Travis Shlenk (top one worst name of all time) and Mavs GM Donnie Nelson had different ideas. 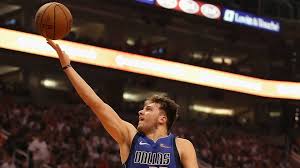 Atlanta selected Donic third overall and not many people were shocked. Doncic has been praised as the maybe the best European prospect since forever and the energy around the Hawks was flat as could be. Plus, thinking of Doncic wandering through the Atlanta nightlife is just about as funny as it gets. So what’s the first thing you do with the best prospect in a continents history? Send him to the team who has the actual best European of all time, for the most exciting shooter college basketball has seen since Jimmer Fredette.  The Mavericks got Young at five and neither guy could put their ill fitting draft snap-backs on long enough to take an accurate awkward picture. The Hawks (I would rather write this out than his disgusting last name again) GM risked the jobs of everyone in the front office by making the move and out of the gate it’s hard to tell if the risk was worth it. Not because either guys isn’t as advertised, but because both are exceeding the billing. Through roughly a month Doncic is averaging 19.1 points 6.6 boards and 4.6 assists. Which is roughly the same to Young’s 19.1 3.2 and 7.9. Young’s shooting splits of 43.8/32.1/75.6 are very expected of a young volume scorer. Meanwhile Doncic is shooting 46.7/39.3/69.4 which is somewhat shocking as Young was labeled the better three point shooter of the two. However, Young is passing at an efficiency that was expected out of Doncic.

Is it way to early to even debate this topic? Yeah, in all honesty it is. However, this is what everyone wanted from Fultz and Tatum last year. Two rookies with massive amounts of potential being swapped for each other causing a career long link. Last years version didn’t live up to the hype and the fact that so far, this has, is exciting. Maybe ten years from now Doncic will be just another Euro flop like the Jan Vesely’s before him or Trae Young will be another college volume scorer who couldn’t make it work in the league. Maybe they’ll both stink out loud, or maybe they’ll both battle head to head from across the country. Either way, this is going to be exciting for both fan bases and fans of the game, and I for one won’t waste one year not talking about it.

One thought on “Luka vs Trae is Already Fantastic”