Since starting the season 2-5 LeBron James and the Lakers have won 9 of 12 and have looked as good as we’d imagine once adding James in the offseason. 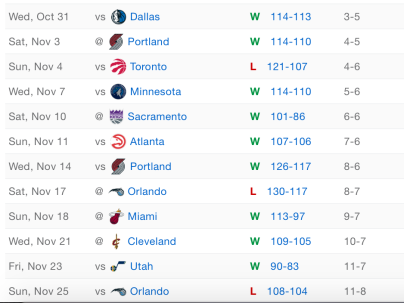 They might not have beaten any title contenders, but for a team who is trying to adjust to LeBron and vice versa, they’ve had some good wins. Two of which against a tough Blazers team, then against Minnesota, Miami, and Utah. Those are all meaningful wins in the grand scheme of things. Confidence has to be found somewhere and getting it going against mid tier playoff level teams is a good start. In said run, LeBron has been virtually unstoppable posting 29.2 ppg 7.5 rpg 6.1 apg on 53.2/48.5/70.2. While his free throw numbers aren’t great the rest sure has been. He’s been dominant, just look at his past 6 games in this stretch.

Now look a this highlights from his 51 point outburst vs. Miami. He’s throwing up threes from the suburbs and slamming dunks through the hardwood. He’s been on a mission and saying it’s been fun to watch is an understatement.

His shooting percentage is way above 50% recently as he’s been on a mission since the Lakers rough start. They’re doing what they usually do, which is score a ton of points (114.2 per game) but what LeBron is doing has to be what needs to be talked about the most. There was a lot of drama coming out of LA, most notably, the job security of Luke Walton (Insert Link to story) and LeBron’s patience.

I’m sure his patience is doing better after shooting up the standings as they’re now only a few games back of the top spot. A bunch of teams have 6-8 wins and it’s up for grabs in the West right now. I don’t think it’s too outlandish to say that the Lakers have a shot at a top 4 seed in the West with how things are going. Check out the standings, Houston’s been disappointing to start (9-9) and no team has shown that they’re superior to the rest of the bunch.

I think this trend will only continue as there is so much talent in the West, especially on the top teams. Last season, the 3rd seed and 8th seed were separated by only 2 games and I think this could be how the whole conference will be down the stretch this season. After going through the West without home court advantage in the WCF, it was clear home court didn’t effect the Warriors as they still were able to make it through to another title. With Boogie Cousins set to debut later in the year, after a torn Achilles, and a history of Steph Curry ankle injuries the Warriors might just play to stay healthy. They believe that wherever they play, if they’re at full strength, they’ll beat anybody. This bodes for a good race in the West as they won’t be playing to win an astronomical amount of games, but rather for a solid showing and health for the playoffs. The Lakers are in this mix and I don’t see the difference between them and the rest of the best teams in the conference. They all have looked pretty even thus far so it’ll be interesting to see who eventually pulls away.

LeBron doesn’t seem to be slowing up so I only imagine this will continue. If he’s at his best, the wins will come, and relevance will continue to flow back into LA. While they had the starpower early, it’s now starting to come together. So look out, The King is back, and he’s looking to bring the Lakers back to the top with him.