The Celtics stand at 8th in the league in free throw percentage this year at 79.6%. They have 7 players shooting over 80% and 5 of those 7 are rotation players (Irving, Tatum, Hayward, Morris, and Baynes). When they get there, they’re knocking them down at a high clip. The point here is, they do not get there very often. They stand at 28th in the league in free throw attempts per game and there’s more fodder to dive into from there. Kyrie leads the team in FTA per game at 3.3 (a career low for him) and Tatum follows behind him at 3 per game. Other than Boston, the Magic are the only playoff team whose leader in attempts per night averages less than 3.3 (Vucevic: 2.8). Where it gets interesting is when you put these two up against others at their own position. 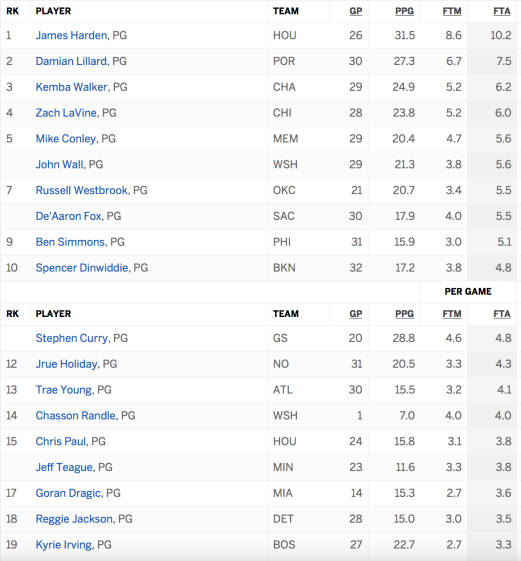 Let’s start out with Kyrie. While I’m not trying to tell him to be James Harden and flop around to get calls, has to improve this part of his game. With all the moves he has he definitely has the ability to draw fouls and shoot a lot of free throws, he just doesn’t. A lot of Kyrie’s game has to do with eluding defenders and contorting his body to avoid them. This inhibits his ability to draw fouls as he is really damn good at swerving through the defense without getting touched. With the amount of time he spends with the ball in his hands I don’t think it’s unreasonable to want him to get up to like 5 attempts per night. We’ve seen in the past that even a tiny spike in free throw numbers can make a huge difference in the overall performance of player (Dame in 2016, Steph in 2013, Harden in 2015, etc.). It clearly contributes to a bump in points per game and takes some toll off of the player health wise, as more time is spent at the line.

For Tatum, I see this as the next main elevation in his game. His moves on the outside whether it be stationary, side to side, or back and forth have all been uber impressive. While he does love that mid-range jump shot, he has attacked the rim more as of late. Either way, if your top free throw takers are both in the late teens at their position in terms of FT attempts, it could definitely be improved.

An easy place to point in terms of figuring out why they’ve faltered in getting to the line is to take a look at their shot selection. They rank 28th in drives per game (36.1), 27th in field goal attempts in the restricted area per game (25.3), and are 21st in field goal attempts in the paint (non-restricted area) per game at 12.3. Another number to throw out there is that they are 8th in mid-range attempts per game at 17.1 per night. Has Kobe infected the entire roster with all of the nonsense he sold Tatum over the summer? Is he teaching Kyrie this same nonsense? Well my friend, that is a blog for another day.

We know what the Celtics do, they jack up a ton of threes and if they aren’t falling how do they respond? You guessed it, they shoot more threes. I get their pace and space offense and I get that they’re focused on the outside. What I would look at from a coaching standpoint is the volume of mid-range jumpers. Turning like 7% of those into either drives or threes would be beneficial to them in terms of free throws. I don’t know about you, but I’d rather a strong drive to the basket with the chance of drawing a foul instead of a fade away jumper from 15 feet. It’s the NBA, if you go to the basket enough, they’ll call stuff. With the amount of talent on this team they won’t have an issue getting the calls, they just have to put themselves in the situation to get these calls. They haven’t done that this season and it’s something they should look to improve upon as the season goes on.

For more absolutely riveting stuff like this, check us out on Twitter @ViewsFromWall for real-time updates, and check back here at VFTW daily for more scoops!