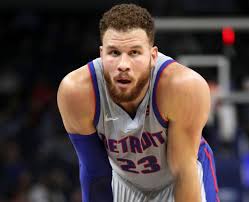 Last night a fan came very close to meeting Jesus after heckling Blake Griffin. Arena security, other players and a few coaches stepped in to ensure that Griffin didn’t strike this man from the Earth, which would’ve earned him a suspension. Blake should be allowed to fight that guy. Not just that guy specifically, just anyone who heckles athletes. Want to scream some stuff at someone who is the definition of peak physical capability? Then you get rag dolled at half court. Blake should be able to lock this moron in the sharpshooter until he passes out like Steve Austin at Wrestlemania. This isn’t the first time this has happened in the last week either. Some putz decided that he was safe enough to try and give Steven Adams an earful.

Adams asked the guy to meet him after the game, and once again arena security stepped in and saved a life, which is their job I suppose. Look at the fan, then look at Adams. In no other social setting would that dummy ever say anything negative to Steven Adams. And before the “they’re at work! Imagine if you got into a fight at your office?!? crowd rolls in imagine someone screaming at you while you’re trying to do your job. “BOOOOO!! Your excel sheet stinks!!!!” then have the same people tweet at you about it, while also being forced to answer questions after your shift about it when you just want to go home. These guys are athletes and entertainers, and there would not be a more entertaining show of athleticism than either Griffin or Adams mauling these fans on the court. So I hereby submit a rule change to Adam Silver; If a fan is heckling a player and the player takes exception to it a fight can ensue. Player wins and the fans ejected, but if the player loses the fan gets a ten day contract. I eagerly await the commissioners response.

Would a player vs fan blog be complete without Millbury using a shoe as a weapon or the Pacers handing out naps to Pistons fans?

Shout out Rob Ray too. Doesn’t get nearly enough credit for giving some stupid fan the blues.